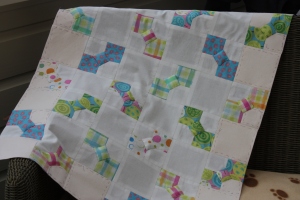 Patchwork (of which English Paper Piecing is one example)  goes back a long way. The earliest example of patchwork has been found in India and dates back to between the 6th and 9th centuries AD

It is said that the Crusaders brought patchwork to England from the Middle East but although there are written references to this no actual examples exist. The earliest surviving example  in the UK dates from 1708.

The original purpose of patchwork was to provide warmth in the most economical way. In bitter cold winters people devised ways of creating extra bed coverings from scraps of old clothing  pieced together. As time went by they were such coverings were also made for the nobility, using finer materials.

By the 17th and 18th centuries cottons (mainly calicos and chintzes) were imported into the UK from India and their quality and variety encouraged more creative designs. It became fashionable for better off families to piece scraps of material as a leisure pastime, and create family heirlooms.  Coverlets and furnishings were often made with materials such as silk, satin and velvet and their surfaces were often embroidered.  Jane Austen made a diamond patterned coverlet in printed cottons in 1811 with the help of her mother and sister.

But it was in the New World that these geometric shapes were to evolve in a whole new way.  The thrift and puritanical outlook of the migrants that sailed from Britain  found expression in their patchwork designs. Their lonely lives caused them to group together in this common pastime, which probably gave them comfort and regularity in their new, unfamiliar and unpredictable home. 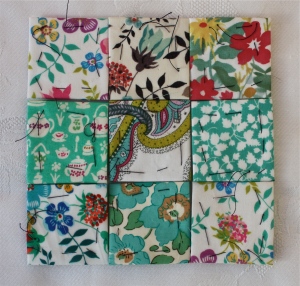 The American cotton crop was not established until the 1720’s and weaving was not permitted in the colonies at first so  imported fabrics were used with thrift and care.In the long winter months women made ‘blocks’ of a foot square. A block was easy to handle and quick to sew and women and girls could group together and contribute to making whole coverlets for their own families and the community in this way.

It was traditional for a young woman to have 12 coverlets for her bottom drawer and the 13th would be her bridal quilt.  Men were presented with a Freedom Quilts on their 21st birthday made for them by their mothers and sisters for his future bride.

As the practice spread across America patterns grew and developed and acquired names inspired by the land  around them (Bears Paw, Indian Trail) , by history (Lincoln’s Platform) by their Bibles ( Jacob’s Ladder), or their home life (Puss in the Corner). Over time the same patterns were renamed to better suit families in other parts of America.

The Golden Age of Patchwork in the UK and America  fell between 1775 and 1875, a time when it was no longer relied upon as a functional craft and when there was more leisure time to pursue it as a pastime.

By 1900  the practice was swallowed up by changes from agriculture to industry. During the fist world war it began to die out as many women worked and there were no longer servants in people’s homes.  There was no longer the time to make them.

In the 1930’s there was a short revival that produced some fine and original work. The Depression was yet again a time for thrift and this was when the Grandmother’s Flower Garden gained its popularity. There was yet another short boost for English Paper Piecing in the 1980’s when there was a resurgence  of interest in home crafts. 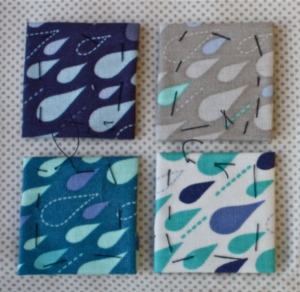 Today,  in our technological age, there is even more to offer the lover of patchwork With the advent of the Internet we have more opportunity than ever to explore colour, shape and surface pattern; we have a huge range of purpose-made complementary fabrics to choose from, more tools at our fingertips than ever before, from acrylic templates and metal threads to digital software and electronic sewing machines that can also quilt and embroider…the list and the scope is endless.

And of course there is still the satisfaction of being able to perfect a skill that results in a useable article that is completely individual.

I want to try and find out how similar work was done in other countries. If you are from a country other than the United Kingdom or America, and this type of work is done there or was done once upon a time, perhaps you could tell us a little about it in the comments section of this page.

English Paper Piecing or Mosaic Patchwork as it is sometimes referred to is traditionally created by cutting out a series of identical shapes (or a series of shapes that fit together in a geometric pattern)  using paper or card to make templates. 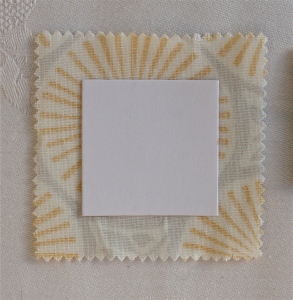 The paper templates are then wrapped in fabric pieces which are tacked (basted) to secure the fabric to the template. Once a series of paper wrapped and basted shapes are completed, these are then sewn together. And, once the quilt top is completed, the papers are removed and and further layers can be added.

Very old quilt tops have been found in the UK with the papers still in the fabric. All kinds of papers were used, personal letters, newspapers, advertisement pages and catalogues, whatever came to hand. These have helped historians to date and trace the origin of the quilt.

As a series of geometric shapes was traditionally used for EPP (triangles, diamonds and hexagons) shapes that have sides that cannot be cut on the straight grain of the fabric, this technique ensured that the edges were stable and provided a high degree of precision when piecing , especially when using fabrics that are difficult to work with.

These are the main reasons why it is still popular as a technique today; though time consuming, it achieves an accuracy that other methods cannot achieve. 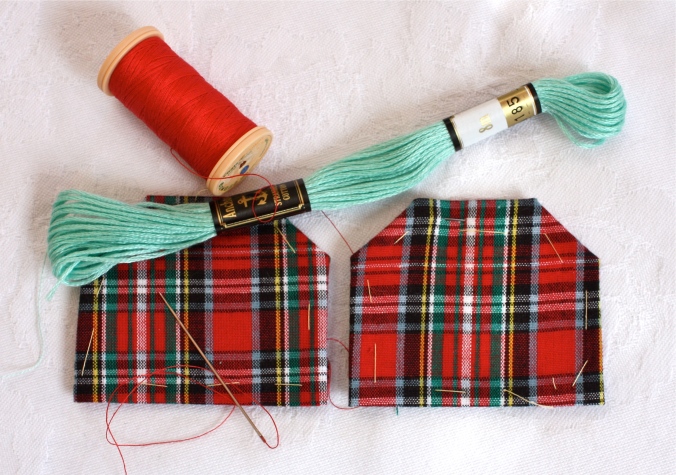 4 thoughts on “A Short History of English Paper Piecing”