This post is not so much to tell you what I have been stitching, as what I have not, and why.

I have almost finished my most recent project with the blocks that go round and round the quilt. This is my favourite quilt so far, in that it was such a pleasure to make. The fabric is by designer Cori Dantini and is called ‘The Sweet Life’. I have really enjoyed following the the lines in the fabric with embroidery stitches and embellishing the dresses that the girls are wearing. I have used mainly running stitch and stem stitch. 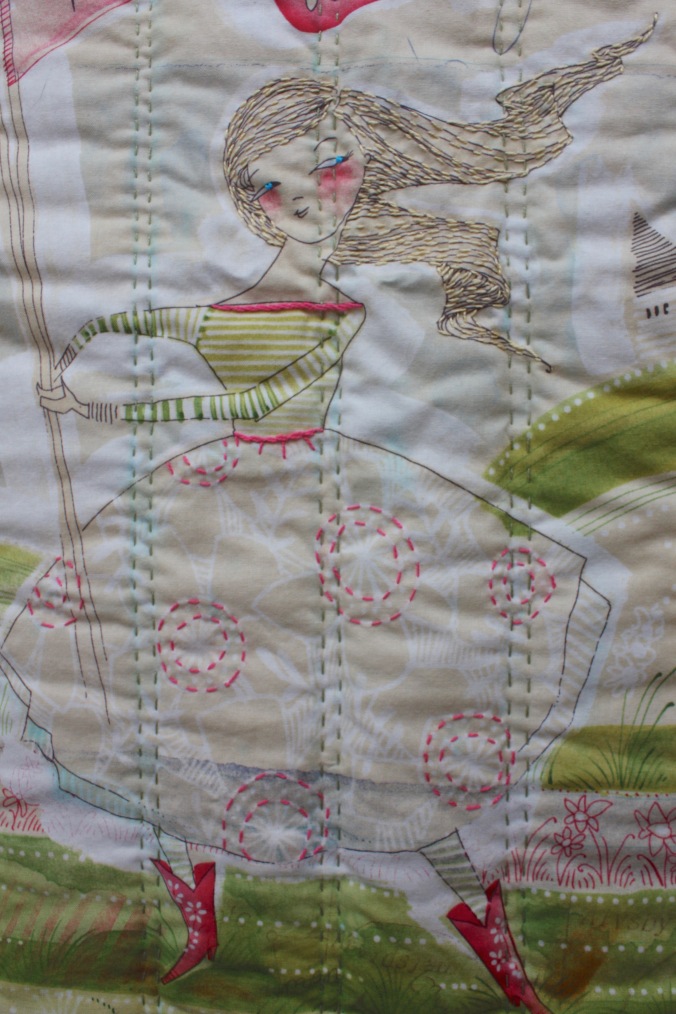 The quilting was simple enough, too, just double lines of running stitches about four inches apart.  These run at right angles to each other, following each of the blocks around (see pic below). The centre block is quilted more closely, down through the blue and green stripes, and I have added blue, green, yellow and pink French Knots at intervals along them. 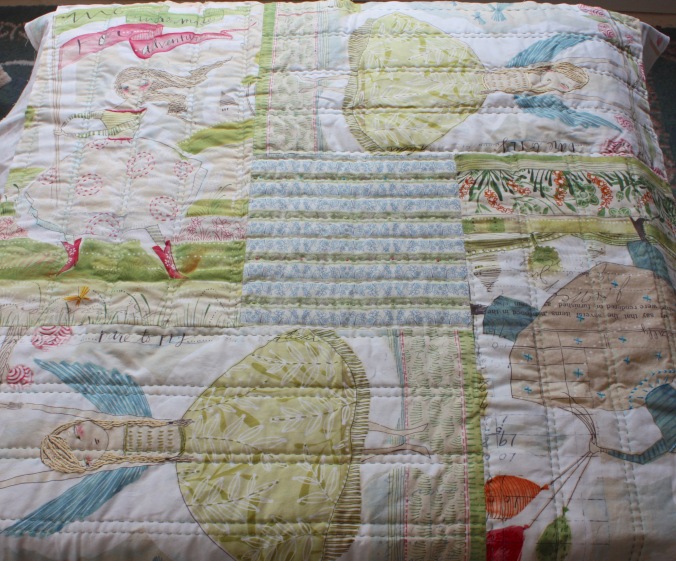 Here is the back of the quilt (below). I have used a co-ordinating fabric, made up of small panels that echo the larger ones on the front, only this pattern goes from the top to the bottom of the quilt rather than round and round. I realise, as I write this, that I could have had it going round and round, which would have been fun and would have echoed the front rather nicely, but I didn’t think of it at the time.

So, it’s almost done. However, I still have the binding to do and I have to admit I am avoiding it. Up until now my bindings have consisted of using the backing material folded to the front and stitched down. But, in experienced quilting circles this is not a ‘proper’ binding and I think it’s about time I learned to do one. I do think it’s important to learn how to do things the way received wisdom says is the best (ie most durable) way, even if you go back to doing it the easy way later on, to suit yourself.

My fears are manifold: I have no idea how wide to make the binding, how to cut the binding, whether I need to put the fabric through a bias tape maker and if so what size I should use. I see there are posts on Pinterest showing you how to cut continuous binding from a fat quarter but I am putting off trying this in case I ruin my fabric, as I haven’t got any extra. The thought of hand-sewing both sides of the binding, instead of just one side, does not excite me much either but at least that bit is straightforward. I know how to sew a seam down. It’s just going to take twice as long.

So what HAVE I been doing lately? Two weeks ago I offered to help out a friend who was going on holiday to the States for a month and hadn’t found anyone to look after her cats. 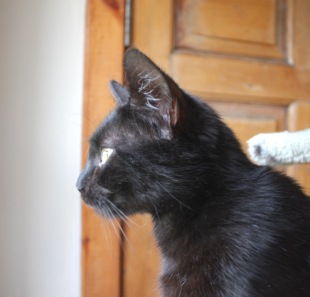 The problem was that one had just had kittens and the owner didn’t want her separated from her six-month old buddy. So I said I would have them all. I mean, how hard could it be? I already have four Siamese cats of my own.

Well, I don’t know where the day goes. There’s feeding and cleaning (a LOT of cleaning) and tickling  tummies, and playing ball, and fitting in photo shoots. There’s trying to do all this without my own cats getting wind of it (which is early in the morning, at intervals while they are asleep in the day and after they are in bed in the evening). So far, it has been very busy and tiring, fitting all this in among my usual household chores, and I find I am thinking about their needs most of the time. Quilts are not getting a look in. Two weeks down, three more to go. And there is an extra bit to tackle soon: The weaning and the litter training of six little babies. I have no idea how all that is going to go but I am in touch with the owner via Facebook and I have my ‘Complete Cat Care Manual’ to refer to. Despite the worries and difficulties, these little visitors have already brought me so much pleasure that I wouldn’t have missed the experience for anything. I mean who could resist six of these?

After the 22nd August, when I have recovered, I will take another look at binding this quilt. Or I might avoid it a while longer and turn my attention to another new project while I muster courage. If anyone has any advice for me about binding this quilt, or a link to share, I’d be grateful. I really don’t want this quilt to end up as another UFO.

It’s been a while since I posted because I have been out gardening in our lovely weather. Now we are back to rain, rain, rain, it’s a good time to let the garden take care of itself and sew, sew, sew.

I had a friend once that worked for an American company and was always coming up with new sayings he had heard at work. One of them was to ‘run something up the flagpole’, or just give something a try. I love the idea of metaphorically offering something to the winds and letting it unfurl, even if it has to come down again. So this post is about new experiments; giving one or two more unusual things a try.

About a year ago I bought some fabric panels from a line called ‘The Sweet Life’ by the designer Cori Dantini. 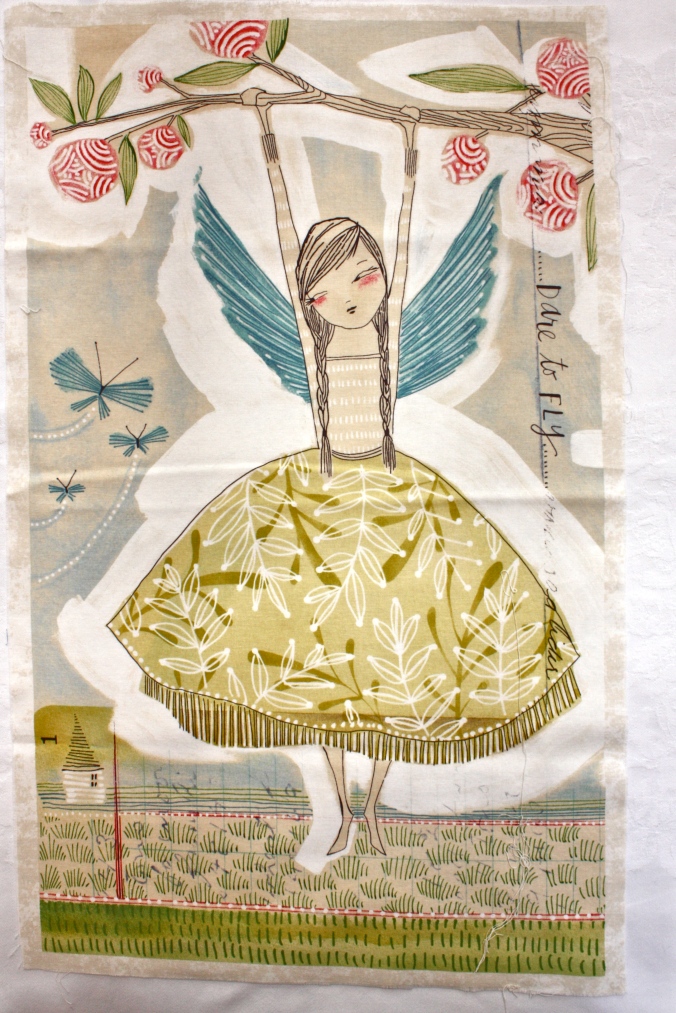 I’m not a great fan of panels because it feel like some of the work has been done for you, but I wanted to experiment with how big I could go with English Paper Piecing. Would the technique still work using very large pieces of paper? And if I had to butt several pieces together would the block be stable enough to keep its shape?   I also wanted to make a quilt that could be seen from all sides. Perhaps panels could be used effectively in this way. I laid the panels out on the carpet to see how it would look: 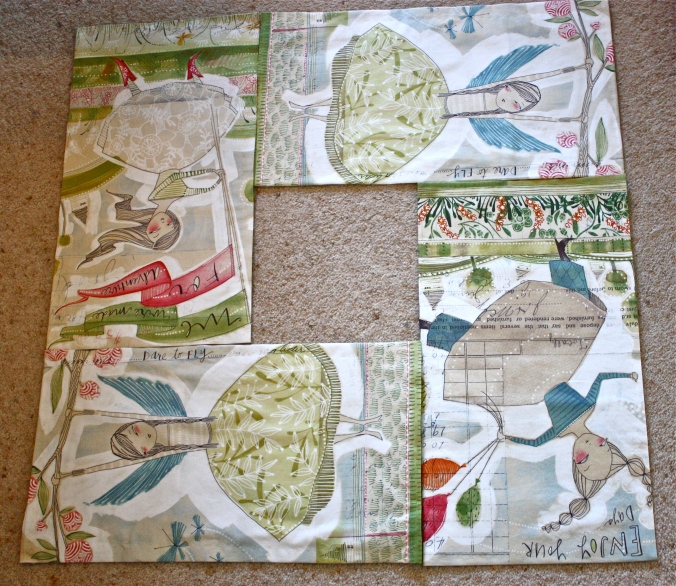 I chose a co-ordinating piece for the back of the quilt, made up of similar, smaller panels, and auditioned some fabrics for the centre square. At first I thought I would use the blue floral design but opted for the green stripe because it blended in better and because it was called ‘Field of Joy’.

I didn’t have any very large pieces of paper, so I used three overlapping sheets of A4 paper stapled together, slightly smaller than the panels, and basted the fabric over the paper. 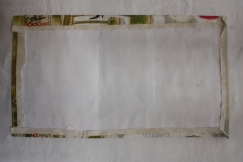 Then I sewed them together, sewing the centre square last. Unfortunately I attached the last panel facing the wrong way.  Can you see, the two girls with wings are facing the same way?

I left the quilt like that for over a week while I wondered whether to leave it alone, or unpick the panel and reverse it. Eventually, I decided to unpick it and change it, for two main reasons: 1) If it was to face this way, it would make sense for the two panels that have writing on to be facing you but they were sideways on, so you couldn’t read them easily. 2) This  started out as an experiment with a ’round and round’ design. If I left it this way then every time I looked at it I would be disappointed that I didn’t do that, that it didn’t work out. The mistake would shout at me. So I unpicked the panel, put the paper piece back in, re-basted the edges and re-sewed it on the right way. It seemed to take AGES. The other paper panels had been taken out (I didn’t want to have to put them all back in, so it lacked some stability which meant going slow). However, the good news is yes, the English Paper Piecing technique is do-able with large pieces of paper, just as it is with small ones.

Then I ran something else up the flagpole: I decided to embroider some of the surface design before I quilted the panels. I knew this would make the quilt totally impractical buy hey, this is about learning and have fun. I didn’t want to go too crazy or the stitches would interfere with the quilting, so I decided to embroider the girls hair and eyes and embellish their dresses a little. What a fun way this is to practice stitches! I can see myself doing much more of this surface stitching on fabric. 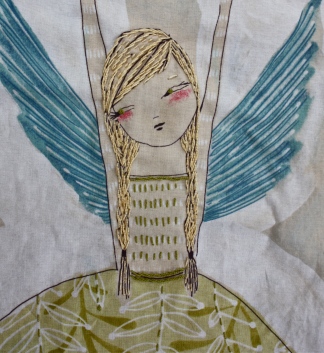 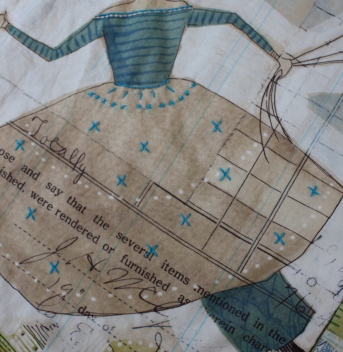 Now it’s time to sew the front and back together with a piece of cotton batting in between and start quilting. In the first picture above you can see I have drawn some turquoise parallel lines across the panel. These are to guide my quilting stitches and will wash out afterwards. In another post, I’ll let you know how it all turns out.

I am also experimenting with a small piece using fabric paint, applique and surface embroidery. More of that next time too….