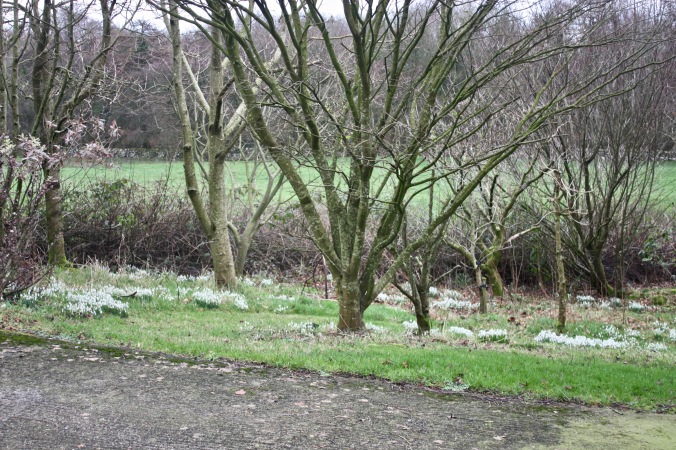 We are already steaming through January, snowdrops are out all over the garden, and it seems pleasantly warm for this time of year. Spring is not far away but no doubt we will be in for some nasty cold spells before it arrives. 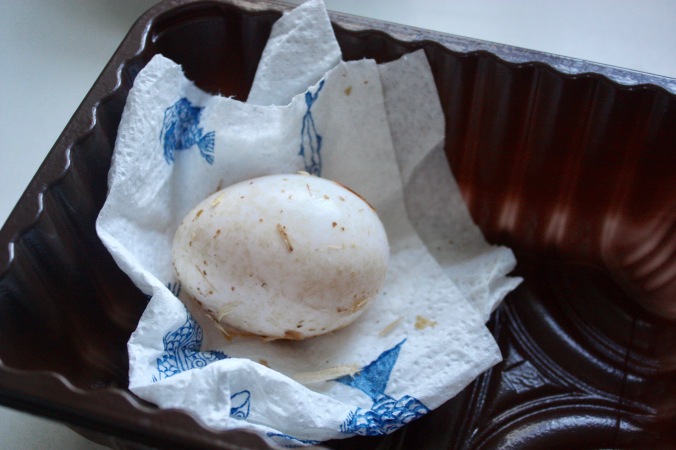 Since the arrival of my three ducks last summer, my sewing has suffered mainly as a result of a massive change in routine. It’s much harder to get a good run at anything without some kind of interruption. It’s clear that I have to change the old routine and work differently. I had my first duck egg appear four days ago which was quite exciting and have been collecting one each day since.  I hope she will sit on some in Spring and give me some chicks.

I haven’t been able to settle on exactly what to do this year. I had wanted to dye and paint my own fabric and do something more ‘arty’ but looking at my stash tells me that I really need to use that up first. I am unlikely to go back to it.  That said, I am sure I am going to be tempted to buy a few bits now and then. And there is no reason why I can’t be a bit more ‘arty’ with scraps. At some point.

I have begun January with some experiments and some UFO’s that needed to be completed. That said, all of them are still in progress and need a good press, which was not my ideal for this post. My first experiment was with Liberty fabric. I have usually used just small pieces of it against a neutral background and that has worked well. The prints are so bright and busy, I wondered if they could ever work if you put them all together, so I thought I would try something and see. This is ‘House with Love in It’ using reds, greens and navy blues. It still needs some surface embroidery on the house and some binding. I went for a mix of sizes of print and one that reads as a solid to see if you could mix prints in this way. Does it work? I’m not sure. 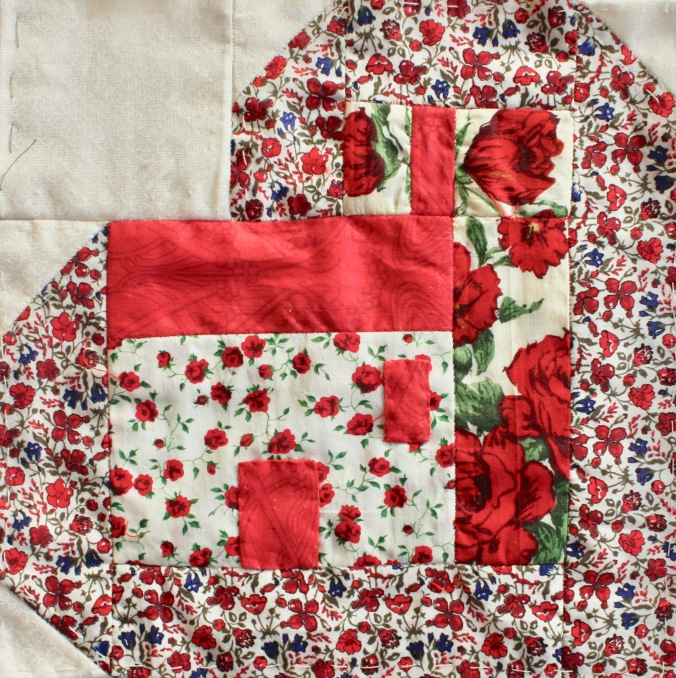 ‘House with Love in It’

Liberty fabric is quite hard to work with as it’s so fine, pins and needles make holes unless they are very skinny ones and its floppiness makes it hard to keep square. An online friend suggested spraying it with starch first and I think that’s a great tip to try.

The second little quilt is one I started a while back but have now managed to finish the top. I took an old traditional American block called ‘Farm Friendliness’ 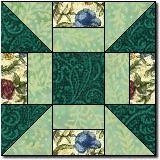 ‘Farm Friendliness’ bock, borrowed with thanks from quilterscache.com via Pinterest

and altered the pattern slightly to give me me more large triangles to suggest hills. On reflection I think I should have make the squares at the corners into half square triangles but it’s too late now. At the time I thought half a hill would look odd. 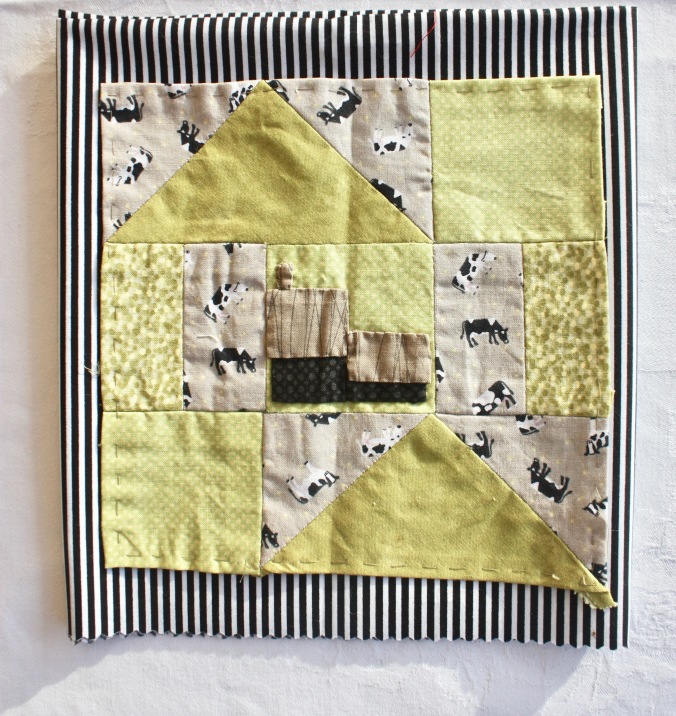 ‘Farm in the Hills’

I’ve also added tossed cows and a farmhouse. I’ve photographed the quilt top against a piece of black and white striped fabric because I think that might make a fun binding. I still have to quilt it to suggest fields, which may make the squares look more appropriate, and add some doors and windows to the farmhouse.

Another experiment is this house in a frosty wood: 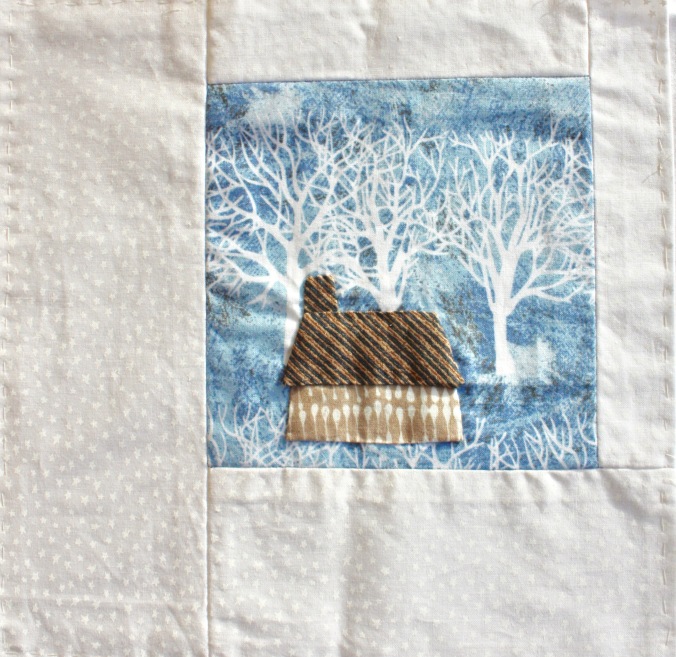 My idea is to extend the trees, or a single tree, beyond the image, out into the frame. I want to cut between the branches and sew it on a bit like this: 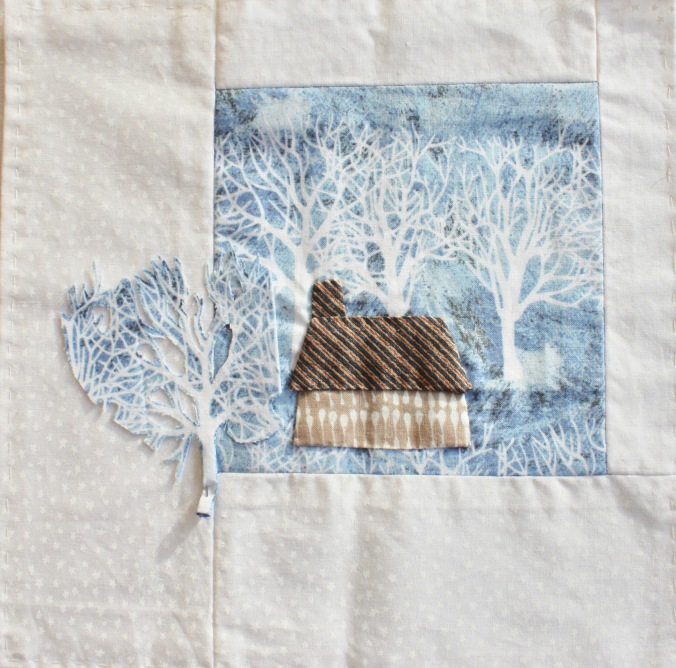 I’m not sure how I will manage it. Perhaps use some wash away interfacing, I don’t know. We’ll see. 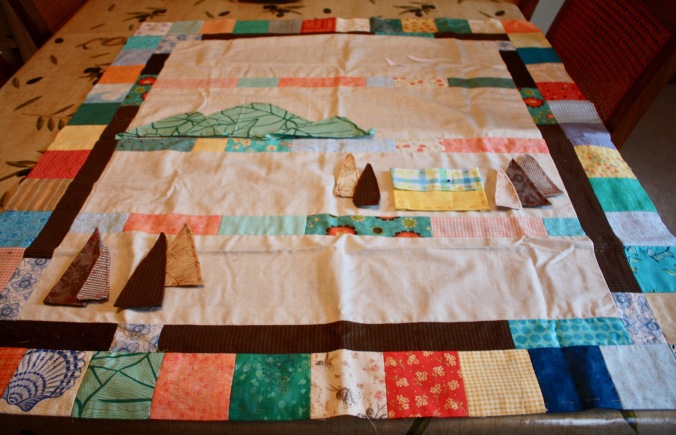 ‘Over the Hills and Far Away’

I am working on some appliqué to complete the top of this, larger quilt, ‘Over the Hills & Far Away’ which was mentioned when I started it, in a post long ago (See ‘Over the Orchard and 5 Lessons Learned’, October 2017 ). I still can’t decide whether to place the house on the bottom row where the trees are (they will all have trunks), or in the next row up, as in this photo. I have kept away from true greens as there are none in the border.

There is more appliqué to sew down to put the finishing touches to this fabric picture ‘Down in the Glen’,  which also featured in an earlier post (‘Tartan or Plaid, What’s the Difference?’, September 2018). It has been sitting around waiting for me to decide what to do with the trees. I have finally decided to unpick them all, as well as the roof of the house, and insert some batting. I am hoping the slight puffiness will give more depth to the picture.  Then I just need to bind it and put it in a box frame. 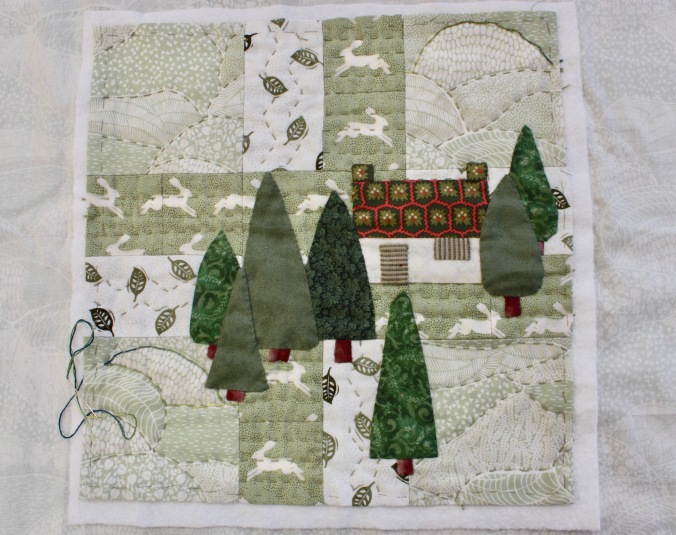 I am also in the working on several mini ‘house’ quilts and fabric pictures  to use up scraps, like this one, still in progress: 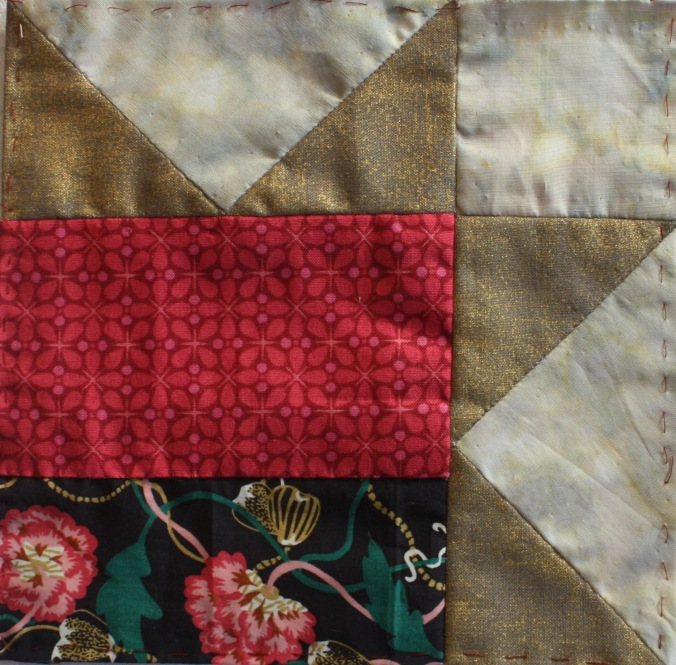 ‘House Under a Wishing Star’

All of them need to be squared up and given a good press. Finishing touches need to be added, then they need backing batting and binding.  So, not even half way through, really (sigh). I never like showing my work like this, half finished, but maybe it’s helpful to see things in progress, to see that they can look pretty awful until they are finished.

So that’s it for now. I have the binding to finish on two Unicorn quilts for a Unicorn post shortly, as well as some more Scottish themed pictures and a couple of ‘House Angel ‘ and ‘Garden Angel’ pictures.

All of these are 8 inches square but I am planning a move to 12 inches square. ‘Down in the Glen’ above, is 12 inches square and I like it better. I used to think this was too big but have had a change of heart. I think very small removes some oomph from the picture. What is your favourite size of wall quilt? Do you you like small squares, long and thin, poster size? And why?