One of my saved projects, a small quilted wall hanging called ‘The Glen’ with Scottish themed fabrics from Lewis & Irene.

I bought stacks of fabric years ago for quilt patterns that I was longing to make but wasn’t brave enough to start immediately, as I didn’t have the knowledge, skills or even the tools that I have now. In a sense I’m glad I did buy the fabric then, because it costs twice as much now but, at the time, I couldn’t imagine a day when these patterns would not seem challenging enough, or that I might want to create my own designs.

My plastic box of multiple saved ‘To Do’ projects

Now I am playing catch-up, trying to make up to twenty quilts in traditional designs (Attic Windows, or Courthouse Steps blocks for example) when I really want to be experimenting with a whole range of new approaches and realising my own ideas .( Lesson 1 – Don’t plan (and buy) too far ahead).

I suppose I could disregard the patterns I bought and use the fabric for other projects but I am not drawn to the same types of fabric anymore, either. Now I might select more solids than prints;  choose more muted shades as backgrounds for appliqué and embroidery;  buy linen and linen blends, tone on tone or textured fabrics;  work with layers (perhaps of muslin or cheesecloth); try new approaches to quilting like Bengali Kantha and Japanese Sashiko; experiment with vegetable dyes, create my own prints and incorporate paints, coloured pencils, inks and crayons into my designs. And I find that I am moving away from mini quilts and table toppers to fabric pictures and wall hangings that tell my own stories. (Lesson 2 – Realise that your tastes will change as your knowledge base grows.)

I don’t want to waste any of those early projects and fabrics that I have set aside (I still like them and can learn from them) so I have decided the best way forward is to tackle  one traditional quilting project, followed by one new experiment, until all the saved fabrics and designs are gone but I have also reserved the time to try new things. I am certain that I will come across a quilt pattern that I am desperate to make from time to time but I will never buy for the future to the same extent again.

In my last post I was playing with embroidered faces. In this post I am re-creating most of a pattern from a book called ‘Quilts Baby!’ by Linda Kop. It’s called ‘Over the Orchard’.

I will incorporate more or less the same colours but I plan to add different appliqués and give it a different title. Maybe it will end up being called ‘Over the Hills’ or ‘Across the Fields’, though that doesn’t have the same ring to it, somehow.

I was so busy following the pattern that I didn’t look at the picture very closely and after I cut out all the pieces from my saved fabrics, I wish that I had. The pattern tells me to gather “1/2 yard of at least six light-coloured cottons: light orange  light teal or blue, and off -white. And then 1/2 yard of at least six dark-coloured cottons: grayish blue, orange and teal.”  These are to arrange a frame of squares of varying value around the quilt. So this is what I started to do: 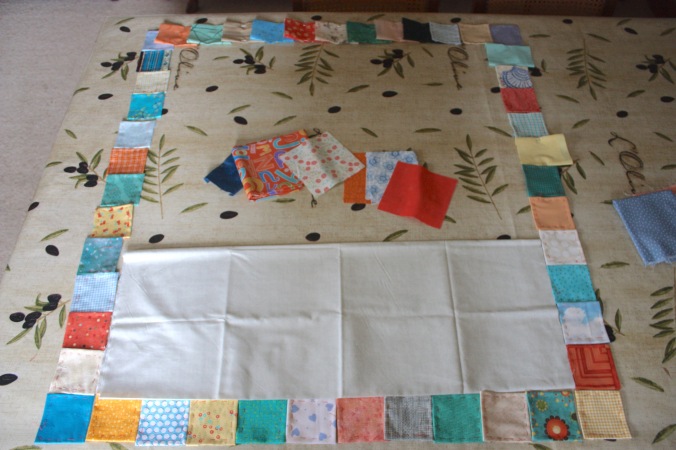 Beginning the outer frame of squares

However, when I looked at the picture again, there seemed to be many more off-white or creamy colours around the frame than suggested by the directions (Lesson 3 – Study the pattern and the accompanying picture together before you begin.) My frame of squares was much brighter, and though I had tried to put different values next to each other (dark light, dark light, all the way around), the end result was more vibrant than I wanted it to be, and with nothing like the same difference in value suggested by the picture in the book.

My squares were basted around paper pieces but not sewn together, so at this point I could have removed some of the colours and put in more off-whites, creams or pale yellows, but I didn’t really want to cut up more fabric when I couldn’t be sure if it mattered hugely, or not. I decided to run with what I had.

The inner border is now sewn to the squares except at the lower right hand corner, and the horizontal strips are sewn together but not to the frame.

When I had sewn all my squares together, I started on the inner border. Some of the long brown rectangles should be 15″ pieces. I didn’t have any paper that long, so I had to split the measurement into two pieces. I think that works OK because there are other smaller sections in the same border.

When I started to put the horizontal strips in place, I decided to remove the darkest shades I had originally placed there, to soften the look. I am hoping this means I can add the odd dark colour to my appliqués without feeling I need sunglasses to look at whole thing. It is still going to be a bit over-bright though, don’t you think? (Lesson 4 – Think more carefully about differences in value when you begin to gather your range of fabrics and colours)

The next step is to sew in the solid inserts between the horizontal strips. The pattern suggests using linen but I imagine that will look far too heavy against the surrounding medium weight cottons, so I have gone for a similar weight of cotton with a linen texture. I think this will give a better result.

My appliqués will all be different from the quilt in the book: a different design of house, a different range of trees and a different flock of birds (yes, they are supposed to be birds). It’s fun to be able to follow a pattern and to put your own spin on it. It helps you to maintain what you loved about it but it’s not an exact replica.

Possible appliqué shapes from my stash of Tree templates

One idea might have been to use plaid fabrics and use the appliqués to suggest a Scottish landscape. (Lesson 5 – Give some thought to making possible and potentially more interesting variations on the same theme, instead of rushing to replicate the original.)

Anyway, we’ll see how it turns out. There are plenty more projects in that plastic box for future lesson learning.

2 thoughts on “‘Over the Orchard’ & 5 Lessons Learned”