Today’s post is a departure from quilting to run something quite different ‘up the flagpole’, something I have been wanting to try for a long time, an image using a piece of manipulated fabric. I decided an Indian woman wearing a sari might be a good idea. First I drew her, deciding that a simple profile would be best, no eyes or ears to detract from her sari. Then I traced my drawing and transferred it onto a piece of neutral coloured fabric.

I had intended to use the wrong side of the fabric, so that the design on it would be very faint, but I forgot and the image ended up on the right side (mistake number one).  For the sari I chose a five inch square of purple/red/pink batik fabric because I felt it was important that the fabric was a vibrant colour and that the pattern suited an oriental theme. 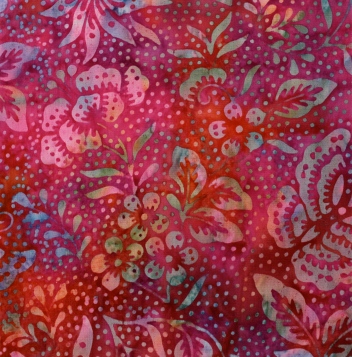 Once the image of the woman was transferred to fabric, I decided to paint her face and hand using a mix of white and burnt umber fabric paint, to create a soft brown complexion. I thought that the fabric paint would cover the design on the face and hand but it didn’t, (mistake number two). Perhaps if I had used the wrong side of the fabric the design would be at least be more muted. It wasn’t worth worrying about it at this stage, so I went ahead and started to outline her hand and profile with brown embroidery thread. In the pic below I have just completed her hand and her chin.

Then, with the outlining done, it was time to add the sari. I folded the batik fabric scrap around the shape of the woman’s head and stitched it down, allowing folds to occur as I worked. As I stitched I realised there were three other sections that would need sari fabric too, the areas either side of her hand and above her thumb. These were areas that would have gone unnoticed if I had left them out of my drawing/tracing, instead of giving myself some very fiddly work to do, (mistake number 3).  I decided to use the English Paper Piecing technique to create those pieces as they were so small. Before I tackled them, I pinned a decorative trim along the edge of the sari, sewing it down only after the two small patches above and below her thumb were added, as they needed to be tucked under the trim.

There is still some more to do before it’s finished, but here is the result so far: 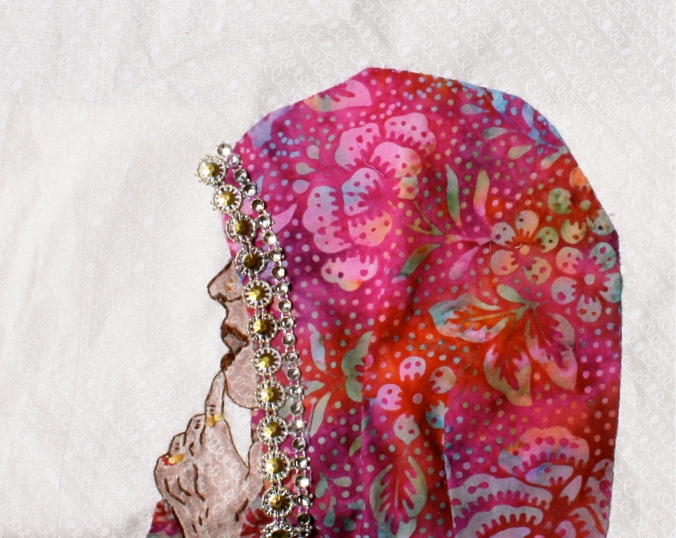 The background needs something, so I am thinking about what to do with that. I quite liked how it looked in the hoop so perhaps I could set the whole thing in something circular. What do you think?

It was just an experiment, so I don’t mind the mistakes too much and I have certainly learned from them.  I hope to show you the  finished pice in my next post.

2 thoughts on “An Asian Experiment”