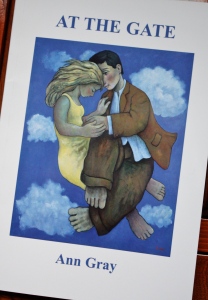 The poetry collection I received from Ann

Today I have a story that I want to share with you. It began at the beginning of September last year, when a poem by Ann Gray was featured on a poetry blog that I follow: https://anthonywilsonpoetry.com.

The poem was completely my sort of poem, the sort I get excited by, the sort that bulges with stuff it doesn’t say, yet is deeply affecting. It was from a poetry collection called ‘At The Gate’, so I went in search of a copy. The only one I could find was on Amazon for £60! Well, I didn’t have even a quarter of that to spare so I wrote to the blogger (Anthony Wilson) and asked if he knew where I could get hold of a copy I could afford. As it happened he knew the the poet and, after asking her permission, let me have her email address so that I could buy one directly from her. My email messages always have a few lines of information about me at the bottom of the page; the addresses of my blogs, Facebook and Pinterest pages and I can only gather that she must have been interested enough to check them out.  However, imagine my surprise  and delight when she responded saying:

“What I would like, which might sound a bit strange, is not to be paid, but for you to make me a little gift….I’d like you to read the book, hopefully you won’t weep too much, and choose a poem that speaks to you and make me a little something in exchange.”

Oh my, I thought, I have a commission! And she’s paying me in poems! (I know it was really the other way around).

I read the book of poems from cover to cover as soon as it arrived and began to think about which poem I would choose. It was hard. They were moving, deeply personal poems and I began to realise that no fabric design that I could manage would reflect the depth of meaning needed to do any of these poems justice. I looked for something concrete. There were dogs, guitars, hollyhocks, pines and, one of my best loves, Indian runner ducks. These small things I could reproduce but there was another thing and it got in the way. The poems brought back my own sense of loss, not only of people but of whole other lives. They spoke of songs I had loved, places I had lived, road names, bridges I knew. They expressed raw parts of me, too. I couldn’t put those into my sewing. 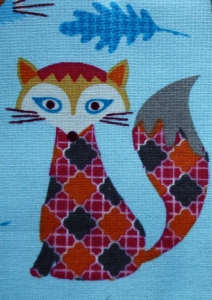 I went on looking. I was reading ‘Fox’ when another of Ann’s poems came to mind. It was one that I read while I was waiting for the book to arrive, when I was searching the Internet for other poems by her; one that I had loved so much. And, although it wasn’t in the collection she had sent me, it wouldn’t go away. It sang to me, over and over, its song of love and hope and faith and resilience. This was what I wanted to put into my sewing. I hope you love it as much as I do.

Here is the poem:

I sing to my blue hen. I fold her wings
against my body. The fox has had her lover,
stealing through the rough grass,
the washed sky. I tell her, I am the blue heron
the hyacinth macaw. We have
a whispered conversation in French. I tell her
the horse, the ox, the lion, are all in the stars
at different times in our lives. I tell her there are
things even the sea can’t do, like come in when
it’s going out. I tell her my heart is a kayak
on wild water, a coffin, and a ship in full sail.
I tell her there is no present time,
an entire field of dandelions will give her
a thousand different answers. I tell her
a dog can be a lighthouse, a zebra finch can
dream its song, vibrate its throat while sleeping.
I tell her how the Mayan midwife sings each child
into its own safe song. Tonight, the moon holds back
the dark. I snag my hair on the plum trees. I tell her
I could’ve been a tree, if you’d held me here long enough.
I stroke her neck. She makes a bubbling sound,
her song of eggs and feathers. I tell her you were
a high note, a summer lightning storm of a man.

My Blue Hen is reproduced here with the kind permission of the poet. 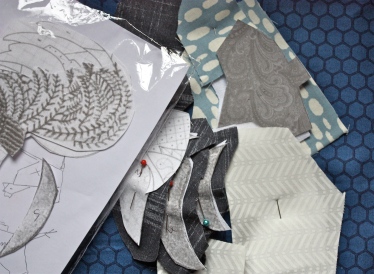 My working designs and patches

the reach of any fox. So I began my task. I made some drawings, chose the fabric and made photocopies of patterns that suggested the stitches I wanted to make.

The birds’ bodies are made of fabric wrapped around a piece of thin interfacing (instead of paper in the usual English Paper Piecing way) but rather than being pieced and the papers removed, the wrapped bodies are sewn to the blue background fabric, applique style, and then surface embroidered. Once all the surface stitching was complete I created a mini quilt by adding a layer of cotton wadding and some backing fabric and quilting the layers together.

In the past all my stitches have gone through all the layers at once to keep them well ‘glued’ together, especially if the piece is to be washed. Most of my stitching was on the surface this time because I thought it would be difficult to sew through the extra layer of interfacing inside the birds. That left me with the possibility of the centre of the piece bagging, once I had stitched around all the frame of the piece. I got around that by silhouetting each bird with large quilting stitches in dark blue and by adding a couple of drifting feathers. I won’t repeat this in future though, because the interfacing was softer in situ than I expected it to be and I missed the silhouette of the piece that appears on the back when all the stitches are visible.

The hens’ running feet were another potential problem, too small to paper piece and too jagged to needleturn a hem under, at my level of experience anyway. I settled on making them from felt and stitching around and over them. 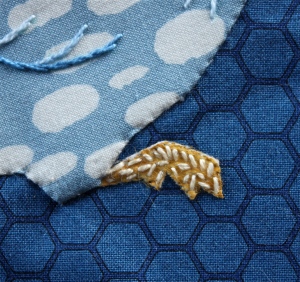 I wanted the backing fabric to have pacing foxes on it, to keep them well behind the hens and unable to catch up and I loved the one I chose initially but it was too white, too stark.

I wanted something that would blend with the colours on the front, so I had to find something else. I chose something softer, though here the foxes here look a little too innocent:

The back of the mini quilt

After I had sewn it all together I added a label, and gave the piece a title taken from the penultimate line of the poem.

I finished it in the middle of January 2017 having emailed Ann from time to time to let her know it was progressing, albeit slowly. At no time did I reveal what I was making or which poem I had chosen. After a while I began to worry that I had not kept strictly to our agreement, that I hadn’t chosen a poem from ‘At The Gate’. I told her that if she was in the least disappointed by this, I would make another one.

I posted the finished piece to her last Friday (January 27th). Less than twenty four hours later she was opening the package at the other end of the country, and this is what she saw:

A Song of Eggs and Feathers

She has told me she loves it. I’m so glad. And grateful too, for such an opportunity.

Do read more of her work.

‘My Blue Hen’ was shortlisted for the Forward best single poem prize in 2015. You can read more about it at http://www.forwardartsfoundation.org/  where there is more information about Ann and the inspiration behind the poem, as well as links to readings. Her collections include At The Gate (Headland, 2008), The Man I Was Promised (Headland, 2004), Painting Skin (Fatchance Press, 1995). Her poems have been selected for the Forward Prize Anthology in 1995 and 2008, and she was commended for the National Poetry Competition in 2010  She has also been a guest on  Arvon courses and a tutor at Ty Newydd.

One thought on “Illustrating a Poem with Fabric”