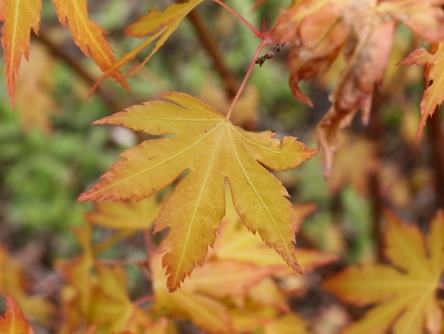 We have glorious colour in our garden at the moment and here are two mini quilts to match. These are the two tartan inspired mini quilts I promised to show you in my last post. I have been a while finishing them because I have about twenty different projects on the go at one time. I tend to do bits on one and bits on another, partly so I don’t tire of any one design and partly to give my fingers a rest from quilting too many at a time.  I have a local craft fair coming up in the third week in November so I have been working hard at building up stock. I am pleased to say I have a whole stack of accordion houses, tall wall houses, house  brooches,  house quilts, ( mini, small and medium sized) and a couple of crib sized ones all ready for a new home.

The two quilts featured here are my first attempts at using cotton tartan and ric-ric trim (spelt rick-rack in the States, I believe).

The first mini quilt I have called ‘Dog Star’. The tartan is a warm brown, yellow, soft red and olive and I have given it a burgundy trim. There is a black star, in a star print, in the top right hand corner among a series of small quilted stars and a dog at the bottom left hand corner, basking in the glow from the stars. If the dog looks familiar, it’s because he appeared in one of my earlier posts (‘The Humble Square’)  on using basic shapes to create people and animals. He wasn’t very happy languishing in a plastic box so thought I might as well make good use of him so I put him on this quilt where I hope he might get some love.Here’s a close up:

The above photo and the one  below show my basting stitches before I start quilting. The one below shows how I put the three layers together (the back the front and the batting in the middle) and then baste from the centre outwards. I make a cross from top to bottom and side to side and then go out to each corner. This keeps the quilt top really secure while I quilt. I don’t want to worry about it moving and ending up with uneven borders. After quilting, I trim the batting to the quilt edge and turn backing fabric ( 1 inch) , folding it once  (to a 1/2 inch) and then again to meet the edge, hiding the top of the ric-rac between and stitching it all down together..

‘Dog Star’ is quite a small quilt, only 23 x 25 centimetres or 9 x 9 1/2 inches.  I have used quilting thread here for the first time but I don’t think it is as successful as using embroidery thread for big stitch quilting. I feel my stitches here are not big enough to be called big stitch quilting and not small enough for the understated look that traditional hand quilters manage so well. Still, it’s early days and I’ll be getting plenty more practice. 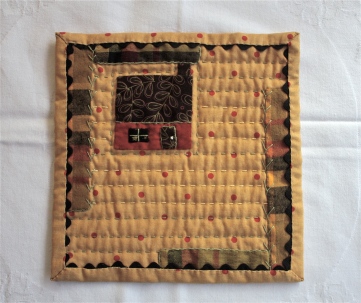 The second mini quilt is even smaller at 20 centimetres or 8 inches square.  (I have called this one ‘The Bothy’. Here in Scotland, a bothy is a small cottage style house, originally intended for farm labourers, now just a basic shelter left unlocked or abandoned in fields or on mountainsides, and available for any passer by to use. This mini quilt uses only a little tartan, the same tartan that I used in Dog Star, as a part frame at the edges.  The centre, background fabric has  a red spot on tan that echoes the colours in the tartan and the this time the ric-rac trim is black. I wanted the quilt to suggest a partly enclosed field with a small house in the corner. I quilted straight across in the manner of a ploughed field but added small fly stitches at the edges to suggest some greenery beyond the field.

In the first quilt I put the trim on the outside, so for this one I thought I would try putting it on the inside. It was very tricky getting it to go around corners. I looked for videos on Pinterest and was struck by how many showed you how to add trim, but not around corners, or posted that it was easy to bend around corners but the photos sliced off the corners, as if they didn’t want to show the not-so-good? result.  One person said you should turn the ric-rac over at the corner and proceed with it  until you reached the next corner and turn it again. I tried that but found that this method created a lump at each corner. The best way seems to be to coax it around the corner, letting it form a small raised ‘loop’ in the corner and then wriggle the loop into place and sew it down. It was a much easier process going around the outside of the quilt. I don’t think I will be using it on an inside border again in a hurry.

Here is the back of The Bothy. 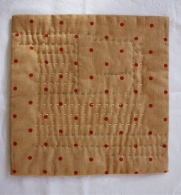 I let the quilting show through but kept the embroidery stitches to the front surface. I felt they might wear more easily at the back and make it look more cluttered. I wanted a simple, clean look. It could be more even but some irregularity is to be expected when you are not using a machine.

The back of ‘Dog Star’ shows just the basic outline of the stars and the dog. Surface additions such as the dog’s back leg and ears don’t show up. 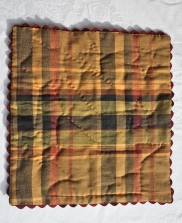 I have two more Scottish themed quilts to show you in my next post and, as these are now completed, I can add them to a new post as soon as I get a moment to photograph them.

In the meantime, here is another photo from my much loved garden. See, the sun does shine in Scotland even in November.  Till next time…..

3 thoughts on “A Tartan Twosome”