As I love quilted and embroidered houses it stands to reason that one of my favourite quilt block designs would be the Log Cabin. Tradition has it that it is meant to represent the logs of a cabin built around a central hearth, which is often represented with a red fabric square in the centre. I came across an interesting article by Jane Hall (dated 2004) online, describing the history and possible origin of the log cabin. You will find it here:

It makes fascinating reading. Today there are a huge amount of variations on the original design: offset logs, swirling logs, thick and thin logs, half logs, half log skew and so on. The more I looked at these patterns the more I began to see pictures in them and feel that it might be permissible to create a variation of my own. For example, in the one below I see a girl in window with shutters, perhaps high up in an old American barn.

In this one I see steps up to the front door of a house, perhaps someone sheltering from rain in a doorway. Or a dog on a temple step in India.

This and the following patterns are via Pinterest, from a book entitled ‘101 Log Cabin Blocks’ but I can find no author or other attribution given.

In this one I see Alice falling into the rabbit hole:

in this one, an avenue of trees: 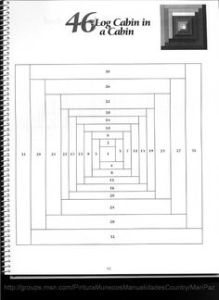 and in this one  a garden shed with a cat in the window, up to mischief.Get the idea? It’s like finding pictures in the clouds, only you do it with quilt blocks.

I turned around the logs on the  right hand side, so that they would resemble the slats of a wooden shed and put the most mischievous  cat I could find in the ‘window’ in the centre hearth area.

Then I embroidered on a climbing vine and added some flowers. 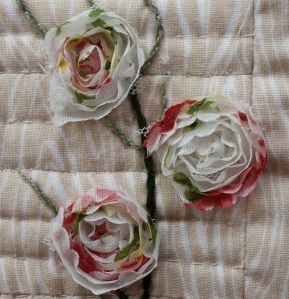 and ended up with this:

At first I wanted to embroider on a spade handle leaning against the shed but eventually decided there wasn’t room; that it would make the whole thing look overworked. I am not sure my idea was entirely successful but I am trying out a few more of these to see what I come up with. They may just end up as UFO’s (unfinished objects to non-quilters!).

Last week I managed to finish one of my UFOs. Hurrah! You may remember it from a previous post, ‘Ah Those Liberty Squares’? It had been hanging around for a while as I couldn’t decide how to quilt it. The large centre area needed something holding it down here and there and I was nervous about messing it up but it turned out OK in the end. Here it is:

‘House in the Country’

3 thoughts on “Something in the Cabin?”