I am fortunate in that I live a stone’s throw away from Scotland’s smallest theatre, the ‘Swallow Theatre’ in Whithorn. 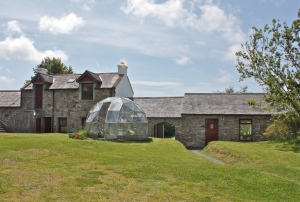 It was run from its beginnings by a man who became a good friend. When, at the end of last year, he decided to pass the theatre on to new owners, I wanted to make him something as a thank you for his friendship and generosity and for the happy times my husband and I spent at his home and in the theatre.

I decided I had to make a swallow, perhaps a pair of swallows flying, gobbling up our little Scottish midges in mid air, perhaps a fabric picture, or a wall quilt.  It’s certainly taken a good while to finish it, three months longer than I had intended and during that time it’s been through a few changes. It did begin as a pair, one bird slightly below the other and flying horizontally towards this one but it felt too big. I didn’t want to  use up his whole wall!  I made it smaller.

I didn’t like it. It got unpicked and redone and unpicked again. Then I became anxious about being able to get it right at all so I had to put it away for a while and then begin again.

By then it had morphed into a single swallow in a much reduced piece of fabric that I had to make even smaller to fit the quilt hanger I had planned to attach it to. So, it’s not as perfect as I wanted it to be but it got done as best I could get it done.

All the fabric I used, except the little red scrap at the bird’s throat, was from Janet Clare’s ‘More Hearty Good Wishes’ which seems appropriate. I created the binding by using the backing fabric brought around to the front, mitred the corners, and used blue embroidery thread to echo the shape of the bird and to make fly stitches to quilt it.

The fly stitches are meant to represent the little flying insects that the swallows like to eat when they are on the wing. They do look a little like letters and perhaps, in hindsight, they should be smaller, but I didn’t want a dotted effect, either.

I sewed a sleeve on the back for the hanger. On previous mini quilts I made the sleeve quite slim but then almost had to screw up the quilt to get the hanger in and out easily.

This time I made it wider but I think the best solution is somewhere between the two. I felt it added a thickness to the top of the quilt that was unnecessary on something so small. You can see how the quilting stitches create the shape of the bird on the other side. I added a label later, too, on which I embroidered the name of the recipient and the date.

I have a wonderful book called ‘The Quilter’s and Patchworkers Stitch Bible’ by Nikki Tinkler which not only describes a variety of different quilting stitches and where they are best used, but actually shows you what the stitches look like on the back of your work, so you can choose the ones most appropriate for the pattern and fabric you are using. I can’t recommend it enough. Until next time…..

Here is my finished swallow: I hope he likes it.