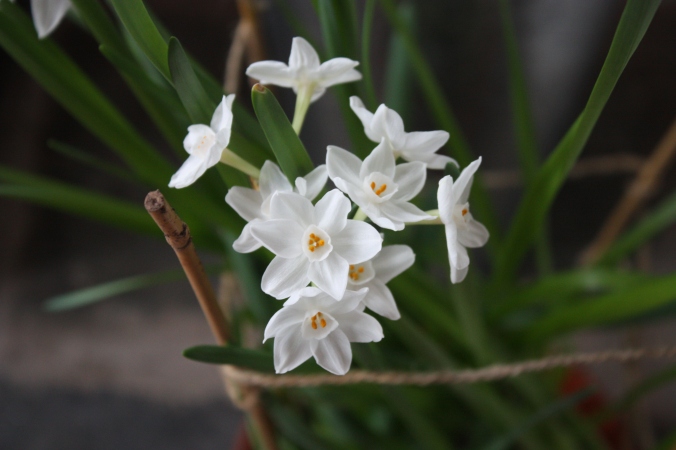 Tiny, scented Daffodils in our porch. Aren’t they lovely?

Valentine’s day is just days away; always a special day for me because it is also my husband’s birthday. That used to mean two cards and two presents until, a few years ago, I made him a fabric Valentine, and he asked me to go on making him one each year. These have all been small and simple, so this year I thought I would try something a bit more ambitious. Hmmm. It has not turned out to be one of my best ideas but the good news is that I have a much better idea for you to try; something that you can put together in an about an hour. 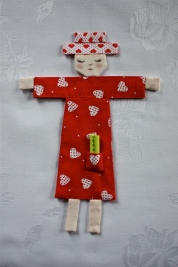 I thought I’d go for an American folk style look.

At first I wanted her head to be cocked to one side, because resting on her cheek rather than her chin would give her head more stability and she would seem to be looking down at the banner. However, I made her hat too large for that to work well, so her head is on straight. It does stay up, so that’s good.

Also when you use EPP to create free standing ‘cards’ like this, you have to do a back and a front version and sew them together, which makes it fairly time consuming. And then there is the embroidery required for the banner, which I haven’t practised for a while. Next year, I am definitely sticking to small and simple.

More of her in a minute, but first, here is an idea for you; a simple project that you can finish in an hour or so. Find a template for a Crazy Quilt Heart on the Internet (the one below is from craftcouturebytc.blogspot.com) to practise with, or better still draw one yourself by dividing a heart into  a variety of shapes: 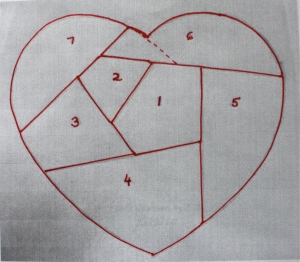 I have outlined this one in red pen to make it clearer. You will see that I have broken up the rather odd shape at the top (to make it easier to sew) by adding an extra line to create a small triangle inside it.

Make sure your template is the size you want it (you might want to reduce or enlarge it), then cut out all the pieces. Number them all ON BOTH SIDES and in a different colour on each side, so that when you come to cover the pieces in fabric, you will have your shapes the right way around. 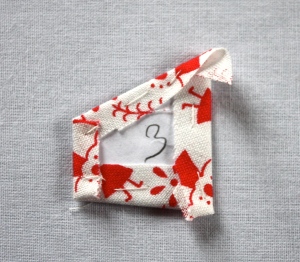 I know this shape is the right way around because the ‘3’ is not a red one.

Hunt among your fabrics for small scraps of red and white, or whatever colour way you plan to use. Then cut your fabric around each shape leaving a 1/4 inch or so allowance to fold under. Fold your fabric over the paper pieces and baste (tack) all around them.  I chose to make my heart a little smaller than my original template, so I put each wrapped piece inside the drawing to keep track of where they belonged. 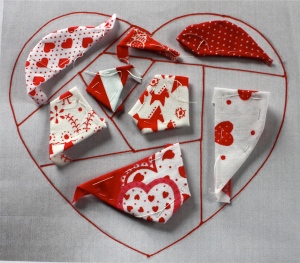 While you are basting, watch out for the pieces with curved sides. They can be a little tricky. Just gather your fabric in a series of little stitches around the curve before anchoring it down. The gathering process helps you to fold fabric over a curved shape. Once you have basted each piece, sew them all together with a simple whipstitch. After I had cut out my shapes and fabric pieces, I sat down to watch a movie while I sewed. 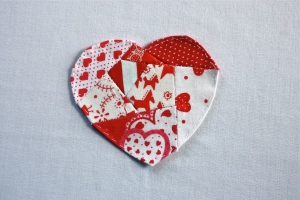 The heart was finished before the movie was even half way through. It’s a nice easy project that doesn’t leave you tearing your hair out wondering why you began it in the first place.

And what of my little red-hatted girl? Well, I have decided white is better for the note in her pocket (the note says “…And So Much More”)  and I still want to put some stitches in her hands to give her some fingers and round off her toes. And I have to touch up the blond curls I gave her on the back of her head……..But for now, here she is: 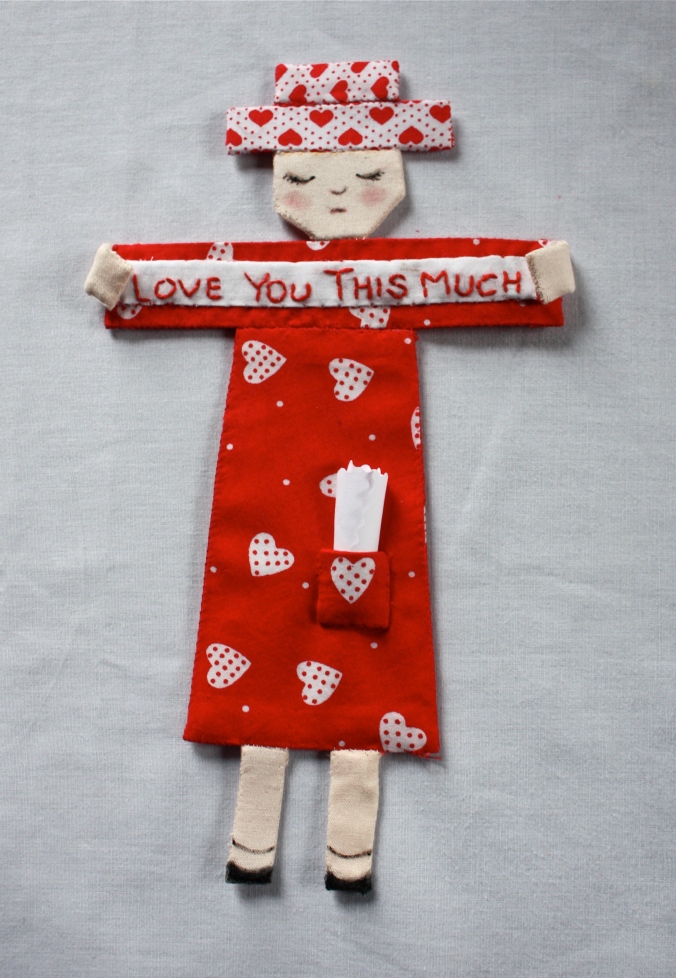